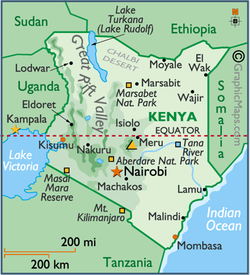 THE NATIONAL FLAG OF KENYA

The flag of Kenya consists of three horizontal stripes - the top stripe is black; the middle one is red; and the bottom stripe is green. The red stripe in the middle is bordered on the top and bottom by a thin white stripe. There is an emblem in the centre of the flag that consists of a Masai warrior's shield and spears.

The black stripe represents the Kenyan people; while the red stands for the blood shed during the struggle for independence. The green represents Kenya's agriculture and natural resources. The thin white stripes symbolize peace and unity. The central emblem represents Kenya's fight for freedom and their preparedness to defend that freedom.

The Gospel Message in the Kenyan Flag:

The black can remind us that God loves the Kenyan people....but that there is no difference...God loves everyone.  It doesn't matter what colour our skin or where we are born, God loves us all.  Black also reminds us of sin.  The Bible says that ALL have sinned.

The red can remind us of the blood of Jesus which was shed.  The Kenyans had their struggle for independence in order to gain freedom; the Lord Jesus died on the cross and shed His blood so that we can be free from sin.

The green reminds us of natural resources and things which grow.  Once we are saved, we need to grow as Christians.  We can do this by reading the Bible and praying as well as having fellowship with other believers.

The white in the flag represents peace.  Jesus gives a peace in our hearts and lives that the world cannot give.  We may still face problems and difficulties, but deep down we can know that Jesus is in control.

The shield and spear in the flag remind us of how the people of Kenya stood up for what they believed.  As Christians we need to be witnesses and stand up for what we know to be true - the Gospel as taught to us in the Word of God, that God sent His son to die on the cross and be our Saviour.  That He died, was buried and rose again the third day.  He lives in Heaven and will return one day to take the saved to be with Him for Eternity. 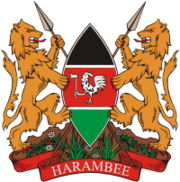 The coat of arms of Kenya features two lions holding Maasai spears and a shied. The shield contains the national colours as explained in the above writing about the flag.

The middle red stripe shows a rooster holding an axe, which according to local customs, donotes a new and prosperous life.

The shield and lions stand on a silhouette of Mount Kenya containing in the foreground examples of Kenya agricultural produce such as coffee, tea, maize and pineapples.

The coat of arms is supported by a scroll upon which is written the word "harambee".  "Harambee" means "pulling together".

A FEW FACTS ABOUT KENYA

Kenya is in East Africa

Full name: The Republic of Kenya

Swahili and English are official languages.  People Groups also have their own languages

In 2007 the population was recorded at 37 million

There are over 40 different tribes/ethnic groups in Kenya

The captial city is Nairobi

Below are the lyrics to a popular Kenyan song in Swahili and English.

Wageni, mwakaribishwa, Foreigners, you're welcome,
Kenya yetu Hakuna Matata. In our Kenya there is no problem.

Kenya nchi nzuri, Kenya is a beautiful country,
Hakuna Matata. There is no problem.

Nchi ya maajabu A wonderful country
Hakuna Matata. There is no problem.

Nchi yenye amani, A peaceful country,
Hakuna Matata. There is no problem.

(lyrics in Swahili and English)